BMW is pleased to introduce the seventh generation of the iconic sports sedan, the BMW 3 Series. Over the past 40 years, no single model has embodied the concept of the Ultimate Driving Machine better than the BMW 3 Series Sedan. Modern design, agile handling, exceptional efficiency and innovative equipment features, all signature characteristics of a BMW, have been raised to a higher level through tireless engineering and testing. The new 2019 BMW 3 Series sedan represents not only the core of the BMW 3 Series range (of which over 15 million units have been sold worldwide) but also the heart and passion of the BMW brand. 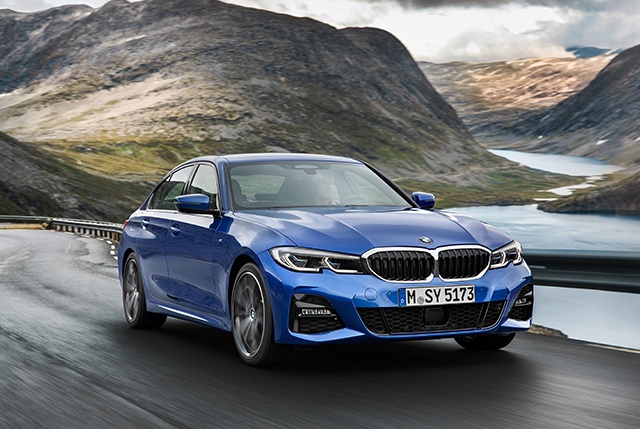 When the first BMW 3 Series arrived in North America in 1976 as a successor to the iconic BMW 2002, it built upon the sport sedan foundation pioneered by that model and launched a new name: the BMW 3 Series that would become BMW’s most successful model – a status it retains to this day. Over the course of six model generations, the BMW 3 Series has ranked as the world’s biggest-selling premium car, led the way for high-performance powertrain and chassis technology and earned a reputation as a pioneer of technological innovations in its segment. The latest edition of the car sees BMW building on the sporting tradition of the 3 Series, whose exploits in race competition have earned it many accolades. The seventh generation of the sports sedan moves the game on once again in terms of driving dynamics, not to mention premium quality and innovation, in its segment.

Boasting numerous detail upgrades, the new 2.0-liter, inline 4-cylinder powering the new 2019 BMW 330i unit delivers 255 hp between 5,000 and 6,500 rpm and a peak torque of 295 lb-ft from 1,550 to 4,400 rpm. The 7 hp increase in output and the extra 37 lb-ft of torque compared with the predecessor engine are the result of the focused optimization of the BMW TwinPower Turbo system – which comprise a twin-scroll turbocharger, High Precision Injection direct petrol injection, VALVETRONIC fully variable valve timing and Double-VANOS variable camshaft timing.

The High Precision Injection system ensures precise fuel metering and particularly clean combustion, its new fuel pump generating maximum pressure of 350 bar compared with the 200 bar of the previous version. The improved direct injection system enables optimal fuel flow through the combustion chambers with atomized fuel delivered by multi-hole injectors. Other characteristics of this engine include a lighter crankshaft, reduced internal friction, optimized heat management and a new digital engine management system. An impressive 0 to 100 km/h time of 5.6 seconds belies the enhanced efficiency of the new BMW 330i xDrive Sedan. 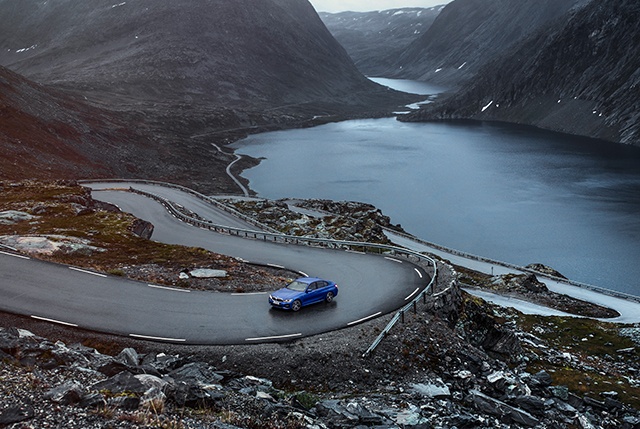 The summer of 2019 will see the arrival of the BMW M340i and M340i xDrive Sedan. The new BMW M Performance model will showcase the full dynamic potential of the new BMW 3 Series Sedan. A new six-cylinder in-line gasoline engine, M Performance chassis tuning, xDrive intelligent all-wheel drive and the standard M Sport rear differential will deliver performance attributes that will impress any driver.

The new version of the straight-six engine developed for the BMW M340i xDrive Sedan will produce 382 hp and peak torque of 369 lb-ft. A 0 – 100 km/h time of 4.2 seconds (provisional figure) takes the BMW M Performance model into performance territory inhabited by high-caliber sports cars. 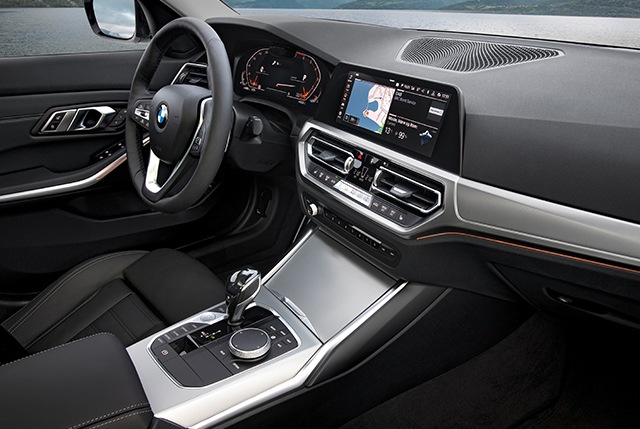 The new 2019 BMW 330i xDrive Sedan is equipped with the 8-speed Steptronic transmission as standard. The latest upgrade of this automatic transmission sees a wider gear spread (from 7.8 to 8.2 and also increases internal efficiency and improves vibration suppression. There is a new control unit and further enhanced gearshift dynamics. In addition to the optimized hydraulic control system, the shorter gearing for the lower ratios boosts the acceleration capability of the new BMW 3 Series Sedan. The 8HP 8-speed Steptronic Sport transmission delivers even shorter shift times and a Launch Control function for highly dynamic, traction optimized acceleration off the line. Shift paddles on the steering wheel allow manual gear selection.

Intelligent connectivity enables the automatic transmission to adapt its shift strategy according to the route and driving situation. If a Navigation system is specified, the 8-speed Steptronic transmission uses data from the navigation system and from the Active Cruise Control system’s radar sensor. This makes it possible for the transmission to avoid unnecessary gear changes when negotiating a series of fast corners and, when approaching a vehicle ahead, for example, to shift down early in order to use the engine braking to scrub off speed. 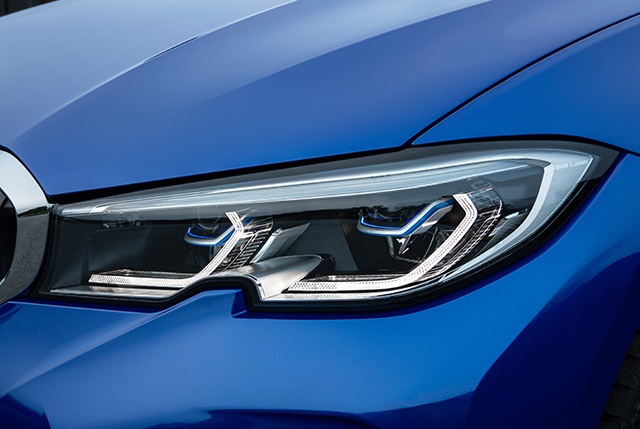 The latest version of the intelligent all-wheel-drive system splits drive torque between the front and rear wheels more efficiently than in the previous 3 Series model. The fully variable power transfer ensures maximum traction and directional stability in all road and weather conditions while also promoting sportier handling. This functionality comes courtesy of the electronically controlled multi-plate clutch in the transfer case which links up with the Dynamic Stability Control (DSC) system and constantly adjusts power transmission – precisely and in a fraction of a second – in response to the driving situation. In this way, any tendency of the vehicle to oversteer or understeer greatly reduced.

The system’s rear-biased set-up helps ensure the new BMW 3 Series Sedan retains the exhilarating driving experience drivers expect from a BMW. Sending more drive power to the rear wheels under normal driving increases agility when cornering. In situations which do not require all-wheel drive, the efficiency of BMW xDrive is increased by directing all the engine’s torque to the rear wheels. The weight of the system has also been reduced, while optimized oil supply increases internal efficiency. 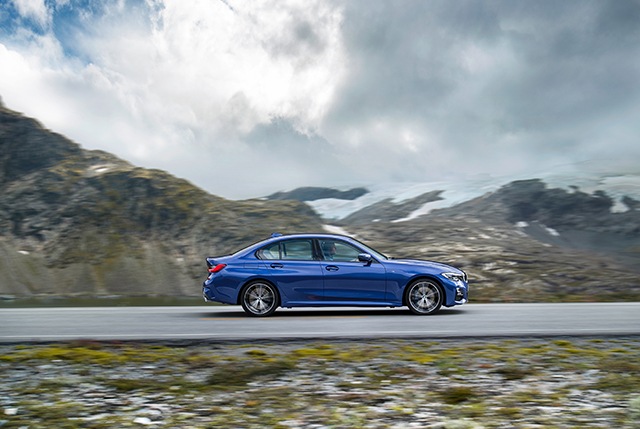 When developing the body structure and chassis technology of the new BMW 3 Series Sedan, a number of clear priorities were used: enhanced driving dynamics, agile handling characteristics, high-precision steering and superior braking performance. The foundations for these attributes are provided by weight optimization, a low center of gravity, a perfect 50:50 front/rear weight distribution and, above all, by the increase in the front and rear track compared with the predecessor model, significantly increased camber values for the front wheels and the substantial increase in the stiffness of the body structure and suspension mountings. Overall body rigidity is up 25 percent, rising to as much as a 50 percent improvement in certain areas. The increased rigidity of the body and suspension mountings enables the M Sport suspension and Adaptive M suspension to go about their work in the most efficient way possible allowing for suspension spring rates to be increased by 20 percent over the previous-generation BMW 3 Series Sedan without loss of comfort.

In addition to these measures, new shock absorber technology has been developed for the new BMW 3 Series Sedan. Used for the first time in a BMW model, the lift-related dampers are part of the car’s standard chassis and make a major contribution to the unique balance of sportiness and comfort – unrivalled by any other manufacturer – which defines the character of the new BMW 3 Series Sedan. The car’s handling and steering dynamics can be fine-tuned with a series of precisely matched chassis options. The functionally coordinated interplay of suspension, steering, tires, brake system and differential lock makes sport driving an effortlessly enjoyable experience. 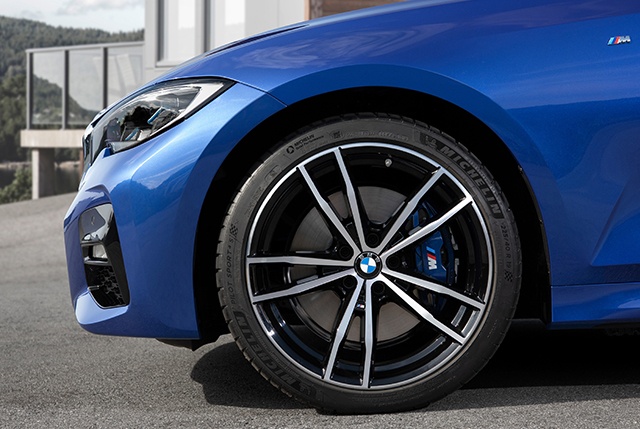 The rigorous testing and development of the new chassis design enhances the agility of the new BMW 3 Series Sedan in a number of ways. Many details of the proven double-joint spring strut front suspension and five-link rear suspension have been upgraded. Along with the sportier handling, the car’s ride comfort and acoustics have both been improved. Aluminum swivel bearings and control arms for the front axle, aluminum wheel mounts and a new generation of wheel bearings for the rear axle significantly reduce unsprung mass. The front axle – with its increased level of component rigidity, the shear panels used to connect the axle to the body and its specially tuned kinematics – enhances both steering precision and cornering dynamics. Factors contributing to the high level of comfort provided by the sedan include a hydraulically damped torque strut bearing, which eliminates vibration and oscillation. At the rear axle, extremely rigid control arms and axle sub-frames along with the use of thrust arms for the body mounting ensure very precise wheel location.

The equipment line offered as an alternative to standard Sport Line specification for the new BMW 3 Series Sedan enables further individualization of the car’s appearance. Carefully coordinated design and equipment features for the exterior and interior allow the Sport Line model and M Sport model to focus more intently on either the dynamic driving experience or luxurious elegance of the four-door car. As well as a line-specific front- and rear bumper design, they also come with exclusive light-alloy wheels in 18 and 19 inch formats, bespoke door sill strips and available LED front fog lamps.

The standard Sport Line model underlines the agile character of the new BMW 3 Series Sedan with features including BMW Individual high-gloss Shadow Line trim for the side window surrounds, plus kidney grille bars and trim elements for the air intakes and rear apron in High-gloss Black. The Sport Line’s interior, including trim strips in high-gloss black and sports seats for the driver and front passenger.

The M Sport model variant of the new BMW 3 Series Sedan is all about the complementing the car’s handling and appearance. The Line’s standard M Sport Suspension or optional Adaptive M Suspensions are enhanced by Variable Sport steering. This variant features larger air intakes in the front end and an equally distinctive design for the side skirts and rear bumper. These elements are joined by BMW Individual high-gloss Shadow Line trim, kidney grille bars in High-gloss Black, air intake trim in High-gloss Black and a rear diffuser in Dark Shadow. The design of the interior is also focused one-hundred per cent on the car’s sporty driving experience, thanks – among other things – to sports seats with M-specific upholstery, an M leather steering wheel, an anthracite-colored BMW Individual headliner and interior trim strips in Aluminum Tetragon.